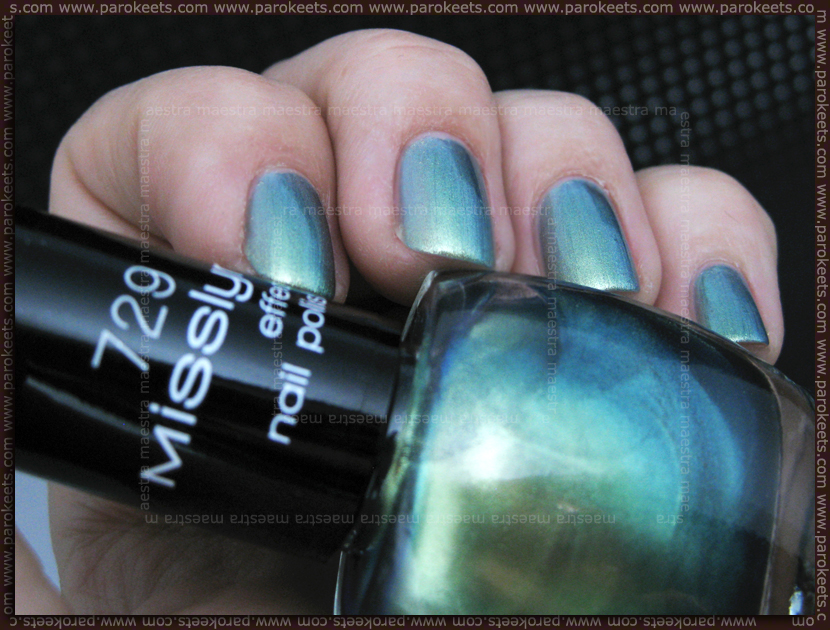 The other day I went to the local drugstore just to see if there’s any new limited editions and stuff available. There were no new displays, but I did find some interesting nail polishes by Misslyn. Four of them caught my eye and I impulsively bought them, because they looked like awesome duochrome nail polishes in the bottle. And you know how rare you find an interesting duochrome nail polish in the drugstore, right? Well, as I wrote before I bought four of them. They didn’t stand on a separate display, they were mixed with other nail polishes. When I brought them home I searched online for swatches and couldn’t find any. What I did find out is that all four of them belong to Misslyn’s newest collection called Peacock. The collection consists of five nail polishes and a highlighter, which I haven’t seen in the store. Isn’t it funny? No special display for a limited edition … hmm … Nevermind. Moving on to the swatches.

722 – Chameleon is a golden-greenish-brown duochrome. It reminds me of Chanel’s Peridot and Catrice’s Genius In The Bottle.

724 – Flower Bird changes colors between dark grey, pink, red-purple and it even flashes teal and green. Fantastic and for me the most interesting nail polish from the collection.

726 – Dragonfly is purple-blue-green duochrome. It’s my least favorite from the collection and that’s not because of the color, but just because it’s the most sheer and it’s the most frosty.

729 – Leguan is another great nail polish. It changes color between golden-green, green, teal and blue. For those of you who wanted Peridot to be more green, this one might be your cup of tea.

My opinion on the Peacock collection

It’s amazing! Finally something that got me excited. Finally duchromes in the stores. Thank you Chanel! You just got to love Chanel. Do you wonder why? Well, because they set these fun and exciting trends and then other brands (like they don’t have imagination at all) follow. They just follow … isn’t that fascinating? And on the other hand it’s sad and boring, but still … this time I’m excited.

And a few words about the quality of the nail polishes.

These nail polishes are on the sheer side (with 726 being the most sheer). But the sheerness is kind of usual thing when it comes to duochromes. These are actually more opaque than I thought they would be. I can get away with only two coats, but I have short nails and I’m just too lazy for three coats (unless it’s really necessary). I didn’t have any problems with the application. When you apply these, I suggest you are a bit careful, because there can be some visible brush strokes if you are not careful. Misslyn polishes don’t dry very fast, but on me they are quite long lasting.

The only polish from the bunch that I do not recommend is the 726, because is the sheerest of them all and it’s also the most frosty. And I also had problems with bubbling with this one. The other three are much better and I highly recommend them if you like duochrome nail polishes.

Misslyn bottles contain 10 ml of nail polish and they are sold for a bit less than 5€ in Slovenia.

Have you ever tried any of the Misslyn polishes? What do you think of them? And which one of the bunch is your favorite?