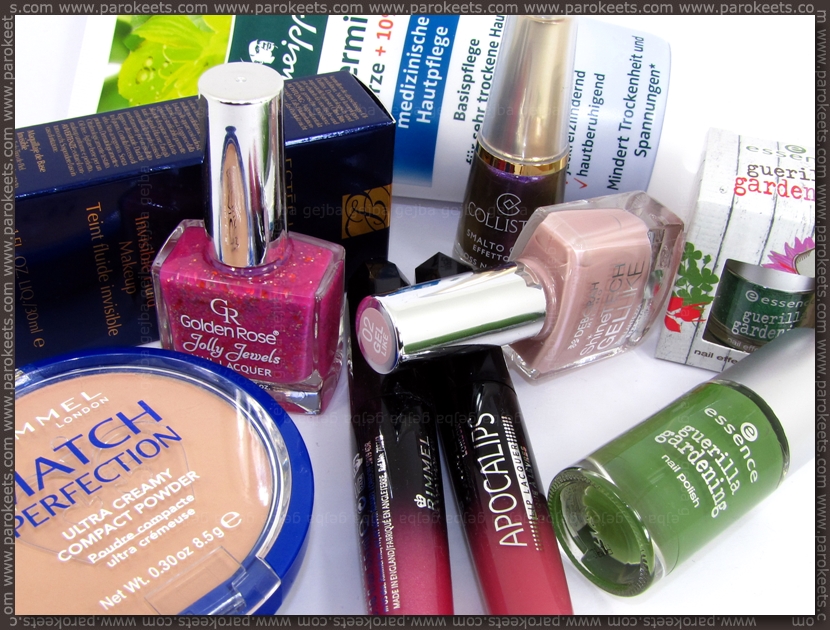 Some of the goodies found their way into my lair so I thought I would share them with you.

You know how oily skin I have on my face, right? Well, I have opposite problem with the rest of my body – dry and itchy skin. A lot of generic “filler” ingredients can make everything worse by causing breakouts all over my body, red patches … I desperately needed some kind of body milk/lotion for my crazy skin, but saw nothing I liked ingredients wise. I used to really like Kneipp products, but year or 2 ago I suddenly started avoiding their products as ingredients went downhill (for me of-course) and price went up. One day I was shopping with my mom and lady in pharmacy type store suggested I try Kneipp Körpermilch (body milk) with 10% urea. I liked the ingredients (lots of quality oils + urea) so I went for it. Well – it ended up beeing present from my mom. So far – I like it … a lot. Only thing I would get rid of is the scent.

Essence Guerilla Gardening nail polish and nail effect power will be my first foray into the land of velvety nails. Let’s see if I’ll be able to stand it on my nails.

My brother was darling and bought me few of the Rimmel goodies. I got compact instead of liquid foundation, so I guess I’ll be testing that one instead. And I have two of the Apocalips lip laquers I really wanted to try out for some time now. Shades are Celestial and Out Of This World.

Collistar has whole new stand of mini nail polishes (6ml) that were my lemming for a while now. They’re finally available in my country so I picked first one to test the waters aka formula, lasting power … I went for purple-green duochrome Viola Camaleonte (562).

Deborah has 50%(?) off for some of their nail polishes in Slovenia, so I picked one more Gel Like nail polish. This time in no. 02.

Another gift from my brother – Golden Rose Jolly Jewels 113.

Last but not least is my chosen summer foundation – Estee Lauder Invisible Fluid Makeup in 1WN2. I wanted also Double Wear Light, but my shade was sold out. There was one more thing that really drew both Maestra and me – small EL eyeshadow palette with great pigmentation, formula and color selection. As both of us already have tons of eyeshadows, we passed it with heavy heart. We did buy it though (anything else would be sacrilege ) – for one of you lucky girls … that is, if I’m able to part with it. :D

OK – enough of rambling. I’m off to do few swatches as full manicure is still out due to the broken nail. Thankfully it’s coming along nicely so new manicures and videos will be coming up in the near future.

10 thoughts on “Little bit of everything haul”