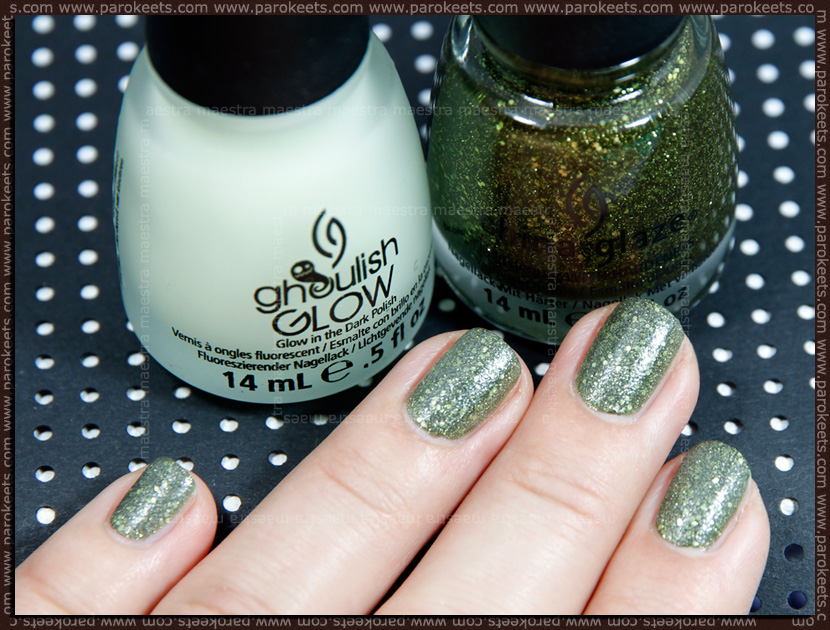 It’s Alive is an amazing green glitter polish. It might just be the best glitter polish I have in my stash. It has dark green base and light green glitter. There are (at least) two types of glitter: sexagons and small square glitter. The combination of base color and glitter works perfectly. Application was easy. The polish is very opaque and it dries very fast. It dries to a rough finish. There’s two coats in the photos below and with no top coat.

In the dark (the room wasn’t completely dark/black) … the bottle of Ghoulish Glow makes a great night light. :D

And a short video …

To sum it up:
It’s Alive is a fantastic glitter polish. Although it chipped on me very fast, I love it. If you like glitter and green polishes, this one is a must have.

Ghoulish Glow is a fun polish. It’s something different. I like it, but I don’t think it’s a spectacular polish and certainly not a must have.

Have you ever tried a glow in the dark nail polish? Which one is the best in your opinion? And what do you think about the It’s Alive polish?