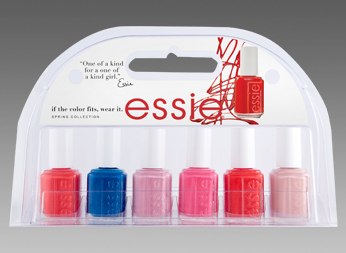 So far I have to show you only two shades – Mesmerize and One Of A Kind. I’m expecting the third – Status Symbol to arrive next week. The remaining three, I passed on because they did not convince me (yet).

One Of A Kind is orange-red cream shade, which also applied well and is highly pigmented. The photo is shown only with one coat!
As soon as I saw One Of A Kind, I thought that it was very similar to the Escapades shade of Essie’s last summer collection. I made a comparison and found out that they are similar but not identical.

As I wrote before, the shades are similar, but not identical. OOAK has significantly more orange in it as E does.

As soon as I get the Status Symbol, I’ll write more about this collection …