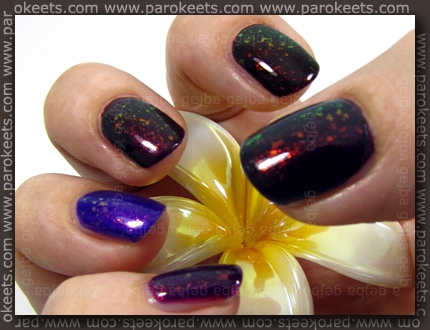 Lucy brought me gorgeous mini polish from Germany, that has douchrome flakies.

Since Glam Nails Larissa shade is quite watery, I decided to layer it over darker base. But I just could not decide which one to use. So I ended up with skittles manicure. 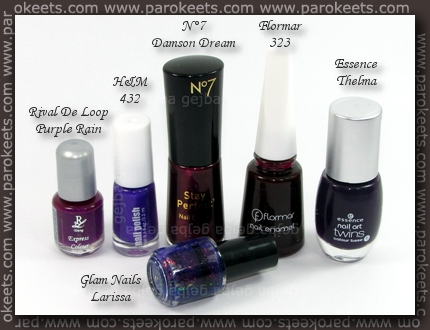 This is skittles manicure without the flakies (polishes are in the same order as on the first photo).

I had help in the form of a flower from H&M.

Next I used two layers of Glam Nails Larissa polish, but I still didn’t manage to get even coverage. They say practice makes perfect – so I’ll just have to practice more.

Larissa consists of violet base with douchrome flakies and shimmer suspended in it. Flakies actually remind me quite a lot of Gosh Rainbow ones. 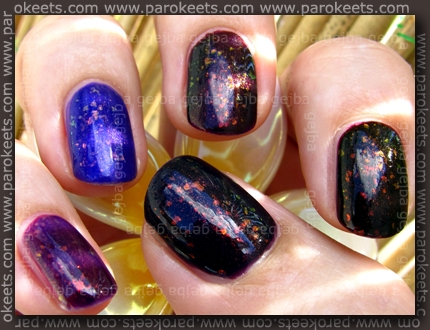 P.S. Almost everything is ready for our next giveaway. After we hit 300 Google Friend Connect followers, one lucky reader will be given an opportunity to win a huge amount of make-up goodies.

Welcome to our paradise on Earth, where Parokeets ladies share with you our love for makeup and other pretty things.You can find tips&tricks, reviews or just a quick advice.
Contact us: blog@parokeets.com
© Copyright 2019 - Parokeets.com
We use cookies to ensure that we give you the best experience on our website. If you continue to use this site we will assume that you are happy with it.OK