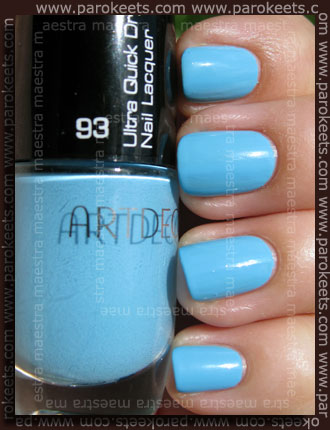 It looks like Artdeco has a new line of nail polishes. It’s called Ultra Quick Dry Nail Lacquer. I haven’t seen them in Slovenia yet. I bought these in Austria. There are some great trendy colors in the collection. I bought four of them. It’s strange that two of the colors I bought aren’t listed on their official web site. Never mind, here they are …

68 is light creme grey. Lovely color and great application. Two coats shown in the picture below. Not listed on the official web page.

88 is a light green, but I wouldn’t consider it as a mint green. It’s too yellow in my opinion to be a real mint green. This one was a bit streaky. It would be best with three coats, but I did only two (because I’m that lazy  ). Not listed on the official web page.

90 bluish green – there are only numbers on the bottles. I found the names at the Artdeco web page. Bluish green is exactly what the name says. It light green with blue undertones, but I wouldn’t call it a teal. It’s too green to be a teal color. My picture shows it a bit too turquoise. It’s not turquoise either. It’s greener. No appliation issues. Two coats shown in the picture below.

The last one I bought is a lovely sky blue color called 93 blue lagoon. I wore it for two days without a top coat and it didn’t chip. I couldn’t believe it myself. The application was flawless too. Two coats shown in the picture below.

I don’t have a lot of Artdeco polishes. Mainly because they usually don’t have interesting colors and the polishes aren’t cheap either. The price for the Ultra Quick Dry Nail Lacquers is 5,79€ for 6ml, which is certainly not cheap. But I liked some of the colors, so I bought them and I’m not disappointed. I wore Blue Lagoon for two days without a top coat and it didn’t chip. Impressive! And they dry fast too. Really, I don’t have any complaints, except the high price. The brush is the regular round one and I like it. Nothing more to say. I hope they will be available in Slovenia soon.

Have you tried the Artdeco polishes yet? What do you think of them?