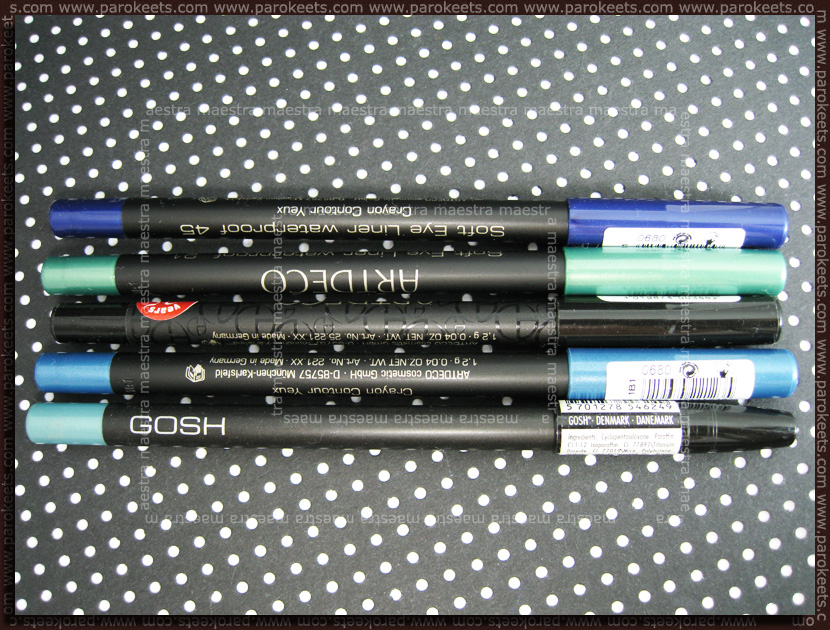 Today I’d like to present you my absolute favourite eye pencils. Well, my absolute favourites are still the Gosh ones (just because they were cheaper), but since Gosh isn’t available in Slovenia anymore, Artdeco Soft Eyeliners are the next best thing. Let me show them first and then I’ll explain, why I love them so much.

The newly developed texture of the Soft Eye Liner is exceptionally long-lasting. After drying, the liner becomes smudge- and waterproof. The pleasantly soft and creamy texture provides a very easy and precise application. The liner can easily be blended out shortly after application and is characterized by its color brilliance and high opacity.

These are the ones that I have.

And here are the swatches.

There are only numbers on the pencils, but on the Artdeco official web site, there are also names of the shades. Here we go.

Why do I love Artdeco Soft Eye Pencils?

They are soft, but not too soft. They are smudge and waterproof. They are long lasting. They stay on the waterline. The color range is nice. And … they are pretty much the same as the Gosh pencils. It’s as simple as that. I don’t know if you’ve noticed. In the first photo above, I’ve included one Gosh pencil, just to show you how incredibly similar they are. And here is another photo.

I don’t know if they are made by the same manufacturer. All I know, both are made in Germany and both look and feel very similar. Both are waterproof and smudge proof.

Recently I discovered that Gosh is sold in Bipa drugstores in Austria (our neighbour country)! Yay! The Velvet Touch Eyeliners retail for 7,25€ which is slightly more expensive than the Artdeco Soft Eyeliners, which retail in Slovenia for around 7€. Well, now that I know that the price is practically identical. I’d say we have a tie.

So … for me the Artdeco Soft Eyeliners are a perfect substitute for my beloved Gosh Velvet Touch eyeliners. The quality is practically the same. The color range is nice. The price could be lower, but for the quality and the color range, I also except 7€ price tag. I won’t be buying them in tons because of the price. Just here and there a shade that really speaks to me.

Have you’ve tried the Artdeco Soft Eyeliners yet? Did you like them?