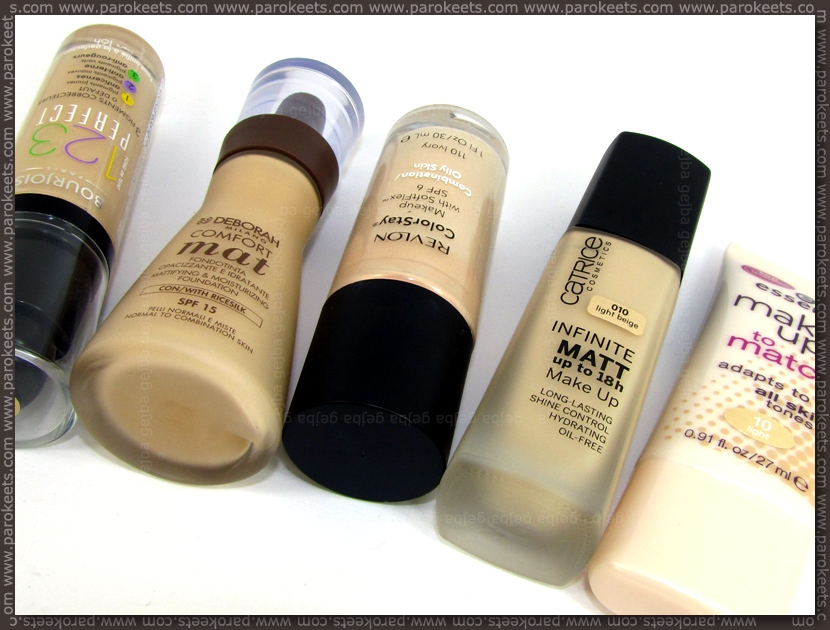 I thought I would start “Project foundation” project by writing a reference post about my skin type, skin tone … and talk a bit about what I expect from the foundation.

I have the misfortune of having one of those chronically problematic skins … and it’s worst on my face. On scale 1 to 10 for oily skin type, mine would be 11 … on oily parts. To make matter worse, I also have a honor of having/getting irritations, allergies, redness, black/white heads … you name it. And as pretty much everything clogs my pores, I have hard time finding suitable skincare products for me … hence the flakiness as lack of moisture/nourishment.

You would thing I would get some breathing space with skin tone after getting drama queen skin type, but no such luck.
I have very light toned skin, but not porcelain white. I guess the closest color description would be – light yellowish to neutral tone … with yellowish being more pronounced.
Especially in the winter I have strong red zones radiating from my nose towards cheek.

Oily/combination skin with flakiness is one of those double whammy situations. Flakiness responds better to foundations for dry skin, while I need matte/satin/velvety liquid foundations if I want to have at least average staying power as other kinds of foundation tend to disappear/slide from oily parts.

Mattifying foundation looks horrible over flaky patches so I try to minimize the “cakey look” with silicon primer over problem areas with touch of nourishing cream under the primer. I especially try to avoid any kind of buffing and rather use stippling method of application.

In ideal world I would probably use combination of silicone primer and waxy compact foundation, but they always seriously break me out so those are no go.
Fortunately for me silicones don’t make too big of a mess on my skin, but other ingredients in liquid foundations are problematic (titanium dioxide, glycerin, stearates …). I experimented a lot with all kind of types and brands until I narrowed down the most problematic ingredients then bought several foundations with the least amount of them and daily rotate them.

I don’t need lots of coverage, but at the same time small amount is must have over the whole face. So I tend to prefer light to medium coverage with ability to build where needed. Foundations with small light reflecting particles I like and dislike those with larger shimmer. So – glow yes, shine no. Completely matte are also not my favorite, but as they usually have the longest staying power …

We bought quite a few of the foundations, but as we would go bankrupt if we got all of those from your WL + those we thought would be interesting for you, we asked few of the distributors if they would be willing to donate the lightest yellow/beige shade. Most of them joined the project. So expect lots of reviews and comparisons … but not all at once or we would probably die from boredom.

I’ll skip putting gross photos into this post … I’m sure you’ll get to see at least one in the coming months. So I’ll leave you with group photo with few liquid foundations waiting to be reviewed. :D

If you have any requests either brand wise or which characteristic interests you the most … please leave a comment.

P.S. Maybelline Fit Me is not coming to Slovenia in near future so for the time being … no review of that foundation.