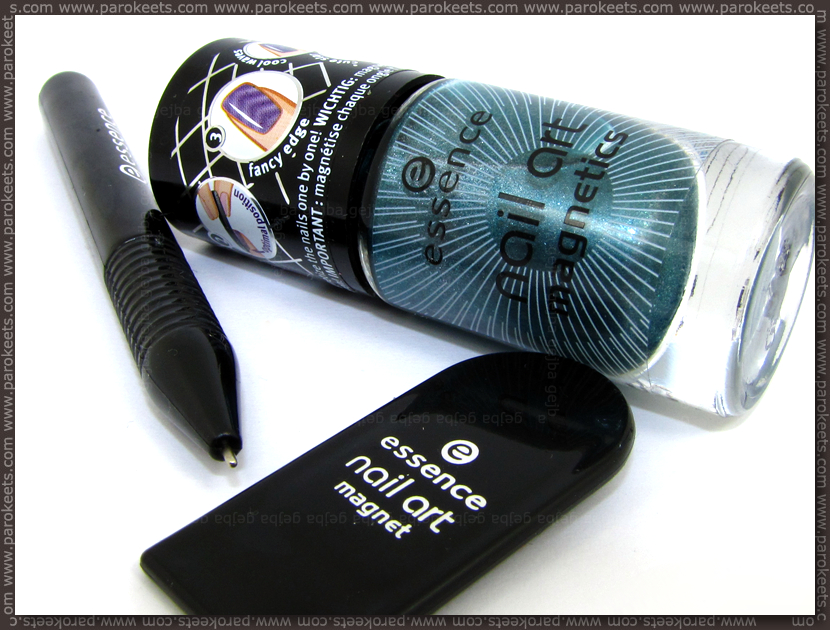 I played around with Essence Witch You Were Here polish, magnetic pen and Fancy Edge magnet.

I know I always complain about something – too week magnet, not enough of iron particles in nail polish … But I’m happy to say that this time Essence got it right. Only thing I’m not completely sold about is straight magnet as they don’t work as well as slightly curved ones on my nails, but as magnet is strong enough I’m still pretty satisfied with the effect.

This was my first free hand magnetic nail art attempt … and it looks like it too. :D Patterns are a lot more pronounced in real life, but were really hard to capture on photo. Dots were my favorite (no, the world is not ending ) as the finally effect was almost 3D looking manicure. I was to far away from the surface with pen though. You can get even closer that with regular magnet which I then tested on waves and line. Oh, yeah – those came out a lot stronger, but for the pattern itself I still prefer regular magnet. I’ll stick with pen for dots, swirls and such.

First off – I liked Witch You Were Here nail polish because of its gorgeous color and pretty shimmer. Magnetic properties were just an added bonus. You can see how it looks on its own in the above photo.

Magnet and nail polish worked together like a charm – no problems what so ever.  Just don’t be as impatient as I was and wait for it to dry little bit before you apply top coat.

I still have Cool Wave magnet on my WL. What about you – anyone still interested in magnetic nail polishes?

*magnets were sent to me for review by Essence Slovenia