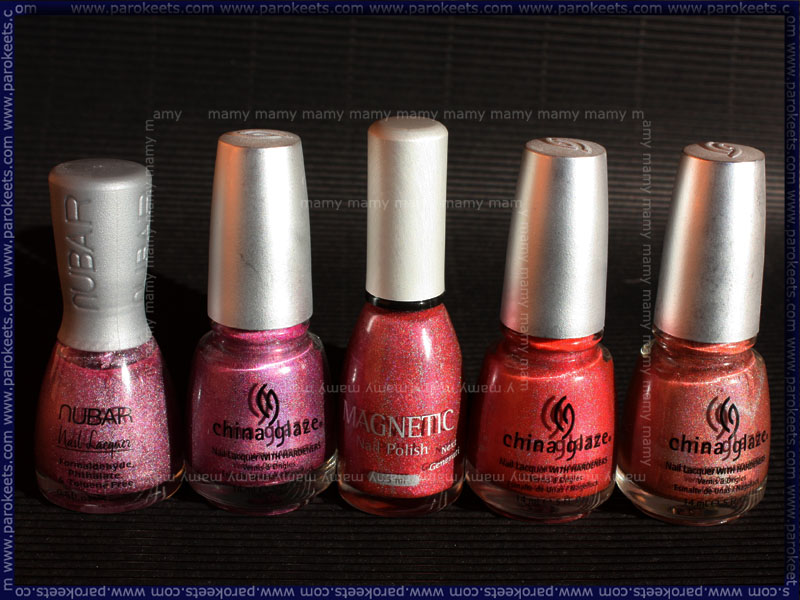 My favorite polish from the bunch I bought in Cosmetics Fair in Celje was Magnetic – Radiant Red. It’s time to fulfill my promise so I made comparison with similar polishes in my collection.

– Nubar  Brilliant: is the most watery one. This is the only polish I applied in 3 layers –  others needed only 2.  This is purple to dusty pink shade, very sheer, but you can not see it on the photo. This is average holographic polish with less “rainbow” colors than in other ones. Even though it is sheer in is not difficult to apply. Pretty, but nothing special.

– China Glaze  BFF, does not need words at all … pretty …

– Magnetic  Radiant Red: looks a lot more holographic in the bottle than on nails. This is red violet color with tiny multicolored shimmer … very elegant color. Also little bit watery formula, but not in a bothersome way. Looks a lot better in sunlight than normal daylight.

– China Glaze TMI: the most red colored in the bunch. Shimmer is even more multicolored and finely milled than in Radiant Red. Those two are the only ones that actually look similar.

– China Glaze TTYL: is red orange to light coppery shade. Holographic through the roof … as all of the China Glaze OMG! polishes.

Photo you already saw and where polishes look similar.

You can see just how different they are in the bellow swatches.

Order is the same in all the photos, but they were taken in different type of lighting.

When I bought Radiant Red I thought it will be similar to the polishes I already owned … but I was wrong … they’re all special.

The hardest thing is deciding which one will be next. Eeny meeny miny mo …

It’s been a while since I showed you one of my flowers. Today I have one for you in the similar color as the polishes I showed you.

Have a nice day dear readers. Till next time.