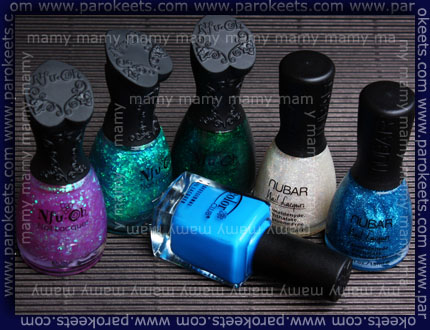 While the heat in the city just wont go away, I decided to spend my time layering polishes. Meet the actors in todays play.

I used neon blue creme Color Club – 220 Volts from Color Club Flower Power Neon Collection as a base. The polish is beautiful by itself and looks similar to Chelsea Girl shade Maestra already wrote about HERE.

I used different polishes for layering in the following set of photos. While deatils look pretty different in the photos, they’re quite simmilar to the naked eye.

I used two coats of 220 Volts and one coat of the polish I was layering over it.

Nfu Oh #56 has smaller flakies than #50 in #54. Nubar Tiara and Sky Sparkle are ordinary shimmer polishes.

I again only recommend acetone nail polish remover such as Afrodita olive.

As usual – flowers for the end. This time I’ll be gone for a while longer.